What if Beta went a different way...

...after beta 1.7.3 the Adventure Update was released by Mojang, changing how the game worked in many ways.

"Better Than Adventure" (BTA) is a fork of Beta 1.7.3 making many additions to the game while also maintaining the look and feel of the game pre-adventure update.

Once you have BTA installed, the IP is monosoho.net.au:25176

The server is in Whitelist Mode, meaning that you will need a valid Mojang Minecraft account, a client with BTA installed (see below), and be added to the whitelist.

The whitelist is managed via monosoho's Community Discord. @monotonehell your Minecraft IGN in the #register channel and ask to be whitelisted. Remember timezones exist so allow up to a day for this to happen.

Information about the BTA fork

Below are two choices for instalation; BetaCraft Launcher or MultiMC Launcher. Choose the one with which you feel more comfortable.

Note the instructions on the Minecraft Forums are out of date.

BetaCraft is a group focused on old-school Minecraft. It was founded in 2013, starting as a Minecraft nostalgia server, they also provide the BetaCraft Launcher, which brings back legacy versions support (created in August 2018) and the BetaCraft Proxy, which fixes inaccuracies common in other launchers (created in March 2018). A combination of the proxy and the launcher fix the biggest flaws of the official Minecraft launcher. For example, they provide fixes for skins, capes, lack of sound effects, client crashes, etc.

To install BetaCraft Launcher with an instance of BTA: 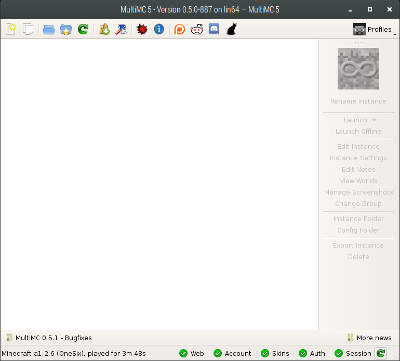 MultiMC is an open source Minecraft Launcher, which has many features, like managing multiple instances of Minecraft all to be installed at once with their own versions, configs and mods.

To install MultiMC with an instance of BTA:

MultiMC should download the instance and install it. Add your Minecraft account to MultiMC (top right corner). Once your Mojang credentials are added, launch the instance and connect to the IP shown above.